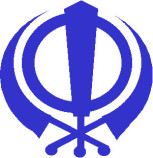 FOUNDED: Sikhism began about 500 years ago in Northern India, now the country of Pakistan.

MAJOR SCRIPTURE: The Adi ranth, revered as the present guru of the faith.

world practice Sikhism, the fifth largest religion in the world after Christianity, Islam, Buddhism, and Hinduism. The religion originated in the Punjab region in the northern part of the Indian subcontinent. Sikhs believe that all human beings have the potential to realize God through loving devotion, truthful living and service to humanity.

The Sikh Gurus were prophets who preached a new revolutionary message to improve life on earth and to enable human beings to come closer to God. There were ten Gurus. The first, Guru Nanak, was born in 1469 and spread a message of love of God, social justice for humanity and freedom from superstitions and rituals. His nine successors advanced his message and institutionalized the Sikh religion.

Instead of assigning a person as a successor, the tenth Guru gave authority to two entities: the Guru Granth Sahib (Sikh scripture) and the Guru Khalsa Panth (community of initiated Sikhs)

The Guru Granth Sahib is a collection of revelations that offer direction on living an ethical life that brings us closer to God. The compositions in the scripture include the poetry of the Sikh Gurus, as well as writings of non-Sikhs, and are sung as hymns to local classical music. The fifth Guru personally oversaw the compilation of this universal scripture in the year 1604.

In 1699, the tenth Sikh Guru founded the Guru Khalsa Panth, a community of Sikhs committed to the basic Sikh values of truth, productive labor, and spirituality. The Khalsa is expected to serve society, defend the oppressed, and provide leadership for the larger Sikh community.

Articles of Faith: K a k a a r

1. Kes – Uncut hair, covered by men with a turban which is optional for women who generally wear a scarf instead

4. Kirpan – A sword worn with a shoulder strap

5. Kara – A bracelet worn on the wrist