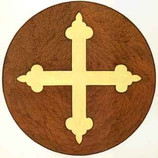 Christianity was founded in the early 1st century AD, with the teaching, miracles, crucifixion and resurrection of Jesus of Nazareth. With nearly two billion professed adherents worldwide, Christianity is currently the largest religion in the world. It has dominated western culture for centuries and remains the majority religion of Europe and the Americas. Christian belief centers on the life of Jesus of Nazareth, a teacher and healer of first-century Palestine. Especially dominant in the western world, today's Christianity has a wide variety of forms, beliefs and practices but all center around faith in Jesus Christ.

The primary source of information about the life of Jesus are the Gospels, four books written by different authors 30-100 years after Jesus' death. The Gospels eventually became the first four books of the New Testament. The Gospels describe a three-year teaching and healing ministry during which Jesus attracted 12 close disciples and other followers who believed him to be the Messiah. This is the basis of Jesus' title "Christ," which comes from the Greek word for "Messiah."

Jesus' teachings focused on the themes of the kingdom of God, love of God and love of neighbor. Along with some of his teachings, his growing popularity with the masses was seen as dangerous by Jewish religious leaders and the Roman government, leading to his execution by crucifixion.

Christians believe Jesus rose from the dead three days after his burial, and in so doing made it possible for those who believe to be forgiven of sin and attain eternal life. Much of Christian belief and practice centers on the resurrection of Christ. The most distinctive belief of mainstream Christianity is the doctrine of the Trinity, which views the one God as consisting of three Persons: the Father, the Son (Christ) and the Holy Spirit.

The sacred text of Christianity is the Bible, which consists of the Old Testament (roughly equivalent to the Jewish Bible) and the New Testament. The New Testament contains 27 books: four gospels (narratives of Jesus' life), one account of the apostles' ministry after Jesus' death, letters from church leaders (the earliest of which predate the Gospels), and an apocalyptic work.

Nearly all Christians regard the Bible as divinely inspired and authoritative, but views differ as to the nature and extent of its authority. Some hold it to be completely without error in all matters it addresses, while others stress its accuracy only in religious matters and allow for errors or limitations in other areas due to its human authorship.

Christianity has divided into three major branches over the centuries. 1 Roman Catholicism represents the continuation of the historical organized church as it developed in Western Europe, and is headed by the Pope. Distinctive beliefs of Catholics include the doctrines of Transubstantiation and distinctive practices include devotion to the saints and Mary and use of the rosary.

2. Eastern Orthodoxy (which includes the Greek and Russian Orthodox Churches and several others) is the continuation of the historical organized church as it developed in Eastern Europe. It differs from Catholicism in its refusal of allegiance to the Pope, its emphasis on the use of icons in worship, and the date it celebrates Easter. Other cultural, political, and religious differences exist as well. Eastern Orthodoxy and Roman Catholicism separated in 1054 AD, when the Patriarch of Constantinople and the Pope excommunicated each other.

3. Protestantism arose in the 16th century during the Reformation, which took place mainly in Germany, Switzerland, and Britain. Protestants do not acknowledge the authority of the Pope, reject many traditions and beliefs of the Catholic Church, emphasize the importance of reading the Bible and hold to the doctrine of salvation by faith alone. Protestantism encompasses numerous denominational groups, including Lutherans, Baptists, Methodists, Episcopalians, Presbyterians, Pentecostals and Evangelicals.