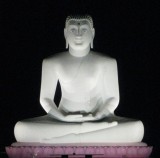 Buddhism developed out of the teachings of Siddhartha Gautama who, in 535 BCE, reached enlightenment at the age of 35 in Nepal and assumed the title Buddha, which means "one who has been awakened." Long after his death the Buddha's teachings were written down. This collection is called the Tripitaka.

Buddhists believe in reincarnation and that one must go through cycles of birth, life, and death. After many such cycles, if a person releases their attachment to desire and the self, they can attain Nirvana. The teachings of the Buddha are aimed solely to liberate sentient beings from suffering.

Buddha taught the Four Noble Truths, which are the essence of Buddhism: there is suffering, suffering has a cause, suffering has an end and there is a path that leads to the end of suffering. He saw that all phenomena in life are impermanent and that our attachment to the idea of a substantial and enduring self is an illusion which is the principle cause of suffering.

It is a philosophy because philosophy 'means love of wisdom' and the true Buddhist path can be summed up as:

The greatest achievement is selflessness.

The greatest quality is seeking to serve others.

The greatest precept is continual awareness.

The greatest generosity is non-attachment.

The greatest goodness is a peaceful mind.

The greatest patience is humility.

The greatest meditation is a mind that lets go.