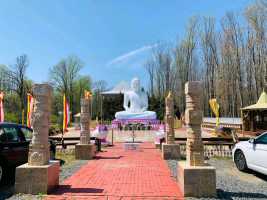 BE PART OF OUR INTERFAITH COMMUNITY GROUP

Join our team to PROMOTE Peace and understanding in our community.

The NJ Peace Garden was established in 2017 by the Somerset County Cultural Diversity Coalition in cooperation with Rotary District 7510, Interfaith community leaders and various community organizations. The committee was inspired by Rotary’s 2013 theme “Peace Through Service”.

After World War II and the dropping of the atomic bomb, Masahisa’s life took on new meaning and he began to share his philosophy for a better world. He created the peace pole as standing prayer for peace with the words, “May Peace Prevail on Earth.”  His philosophy became popular and grew in Japan.  When he died in 1983, his adopted daughter took the initiative internationally, and it became The Global Peace Pole Project.

The Somerset County Cultural Diversity Coalition in cooperation with Interfaith communities, Lions and Rotary International has been holding an Annual International Day of Peace celebration in September and a celebration of messenger of peace on Buddha’s birthday in middle of May at the NJ Buddhist Vihara, 4299 Rt 27 in Princeton. The NJ Peace Garden has been visited by Tibetan and Nepalese monks, Interfaith Community leaders, Native American leaders, community leaders and elected officials.